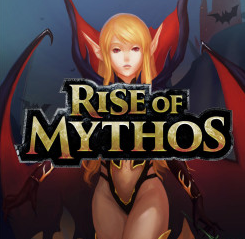 In Rise of Mythos, you assume the role of a hero with the ability to summon creatures, which appear in the form of cards. There are seven types of collectible creature cards in this game, each of which varies in rarity and attacking ability. Naturally, you will be collecting those various cards, editing decks, and commanding the summoned creatures to battle enemy monster and other players.

What really makes this game unique is the multi-lane tactic battle system. In each battle, your goal is to reduce the opponent hero’s life to 0, and you can use both creature cards and skill cards to reach this particular goal. The battle is turn-based and takes place on a battleground that consists of up to four lanes, which divides into 12 squares. At the end of each turn, you draw cards (as long as their countdown number is 0) from your deck and place them in the first three squares in each lane. Then they move forward and attack automatically when it is your turn. It is important to prepare and assemble a good deck of cards to face  enemies, and use your cards in a tactical way. Leveling up your hero will increase the deck size and enable you to use more cards in one battle.