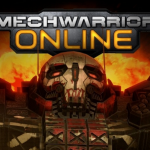 In MechWarrior: Online, players takes the role of a “MechWarrior” who pilot large bipedal combat vehicles known as BattleMechs (‘Mech for short). Players can customize their BattleMech with an array of weapons and equipment, and engage 12 versus 12 battles, the outcome of which earns the players experience and c-bills for future BattleMech purchases and customization.[2] There are currently two game modes that involve protecting and attacking a single base (Assault), or capturing and holding several points (Conquest).[3]

Upcoming features include Community Warfare, which will allow players to align with one of six factions[4] or mercenary corporations to impact a galactic map, as well as the addition of new factions with the Clan invasion and an overhaul of the user interface. Details about Community Warfare and a preview of the new user interface were revealed during the official launch party on September 26, 2013.[5][6] Community warfare was originally stated to be due out within 90 days of open beta (i.e. by January 2013).[7] Subsequently the release date for this feature was stated by the creative director of Mechwarrior Online to be all 3 phases inclusive by launch.[8]