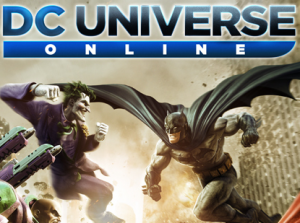 it seems strange that you are so immediately sure of your moral alignment. At no point is there a moment when you distinguish yourself one way or the other on the ship — it’s just “You selected villain so you’re a villain now!” City of Heroes added an alignment system in which you act out at the opening of the game in its most recent expansion, and it made all the difference. The opportunity to betray Superman instead of helping him would have made a far more memorable intro and would have set you into your alignment in a meaningful way.

As a free game though, DCUO more than deserves a second chance. For starters, when Sony say ‘free’, they mean it. In a store that stocks such things as a bouncy ball with Batman’s logo on it (for growly trips to the beach) and a Superman hoodie, the only real content pack worth considering is a $10 pack of Green Lantern/Sinestro Corps-themed Light powers. Without paying, you will face a number of free-player restrictions, including limited in-game cash and a lack of inventory space, plus the increasingly standard ‘only monthly subscribers can create guilds’, but none of these will stop you creating your choice of hero or villain and blazing through the scripted content like the vision of awesomeness you are.